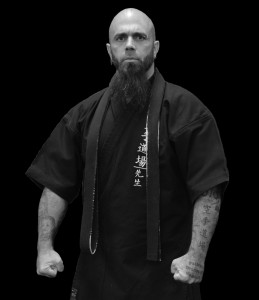 Sensei Brian Pena is certified at Kudan (9th Degree Blackbelt) with 37 years of experience in Martial Arts. Sensei Pena originally started training in the early 1980’s in Yoshitsune Jujutsu in New Jersey under Michael DePasquale Sr. and has been teaching the art of Zen Shotokai Karate & Kobudo in South Carolina since 1990.

His most prized accomplishments revolve around his students and their growth within Martial Arts – and Life. Over the years he has trained thousands of men, women, and children from all walks of life, and as of January 2022 has promoted 22 students to the rank of Shodan (1st Degree Blackbelt) or higher within Zen Shotokai Karate & Kobudo.

In 2017 Sensei Pena organized a non-profit martial arts venture, “Legends of Carolina Martial Arts” to slowly recognize and honor the Legends, Pioneers, and Icons of martial Arts throughout North & South Carolina over the past 60 years. It is on the shoulders of giants that we can train and live this life.

Sensei Pena is married to Allison Pena, and together they have two beautiful daughters, Laney and Gabby. The family owns and operates The Karate Dojo in West Columbia, South Carolina as a full-time venture and labor of love, training hundreds of students each week. The entire family trains and has truly made Karate a way of life – for generations to come.

Sensei Brian Pena has lived his life and enjoys working hard to create special moments for others in Karate – and in Life. He truly enjoys producing smiles, pulling tears, and making memories for those DESERVING recognition.  When it happens to him, it is monumental in his life:

On Saturday – July 31, 2021 as the LEGENDS OF CAROLINA MARTIAL ARTS Induction Ceremony was ending, Sensei Ricky Taylor of Lancaster, SC asked to see Sensei Brian Pena in his office for about 10 minutes. In front of Ms. Pena, Mr. Crawford, and several of his own Blackbelts, Sensei Taylor 100% succeeded in creating a SPECIAL MOMENT for Sensei Pena – that will never be lost upon him. Not only did Sensei Taylor remove his Red Rose from his blazer and pin it on Sensei Pena, he presented him a very personal promotion that absolutely brought him to tears: Kudan (9th Degree Blackbelt) through USA Karate in Lancaster, SC. This Kudan (9th Degree Blackbelt) promotion was acknowledged, certified, and blessed within Zen Shotokai Karate and Kobudo by O’Sensei Virgil Kimmey’s senior student since 1967, O’Sensei Mike Hess, Judan (10th Degree Blackbelt).

On Sunday – January 26, 2020 Sensei Brian Pena was awarded the honorary rank of Godan (5th Degree Blackbelt) in the art of Kenpo Karate within the Kenpo Karate Institute under Mr. Rick Sparks and confirmed by Mr. Bill Daniels.

On Wednesday – January 15, 2020 Sensei Brian Pena was awarded the AKANA Pinnacle Tomoe by Hanshi Jerry Piddington, Hanshi Danny McCall, and Kyoshi Ricky Smith.  This Pinnacle Tomoe Award represents a small inner circle of Sensei who have obtained mastery teaching true Karatedo – mind, body, and spirit. This certification authenticates that Shihan Brian Pena was awarded one of six (#03) Original Tomoe Pendants which shall be recorded in the history of the American Karate Academies National Association.

“For you see though, it’s not the rank or title that matters, but who signs your certificate – these are people that believe in you, and I feel honored that these incredible men and women believe in me. Thank you to everyone that pushes me to work hard every day to improve myself and my students.” – Sensei Brian Pena, (Shihan)