On Thursday – November 1, 2018 Ms. Maria Kimmey and Sensei Brian Pena signed a legal ‘Consent and Authorization’ witnessed by O’Sensei Mike Hess and Ms. Allison Pena authorizing Sensei Brian Pena to affix the signature and seal of O’Sensei Virgil Kimmey and Maria Kimmey to certificates and other awards provided to his students who have obtained excellence in Zen Shotokai.

On Tuesday – December 29, 2020  Sensei Brian Pena was confirmed as an original practitioner of Zen Shotokai Karate and Kobudo under the Aihara, Kimmey, Hess, Pena Lineage by Ms. Mary Louise Aihara, wife of the late Kiyoshi Aihara and Jonn Aihara, son of the late Kiyoshi Aihara and given full legal consent and authorization to affix the name of Kiyoshi Aihara to certificates and other awards provided to his students who have obtained excellence in Zen Shotokai. This proclamation was acknowledged by O’Sensei Mike Hess, 10th Degree Blackbelt (Judan).

“For you see though, it’s not the rank or title that matters, but who signs your certificate – these are people that believe in you, and I feel honored that these incredible men and women believe in me. Thank you to everyone that pushes me to work hard every day to improve myself and my students.” – Sensei Brian Pena 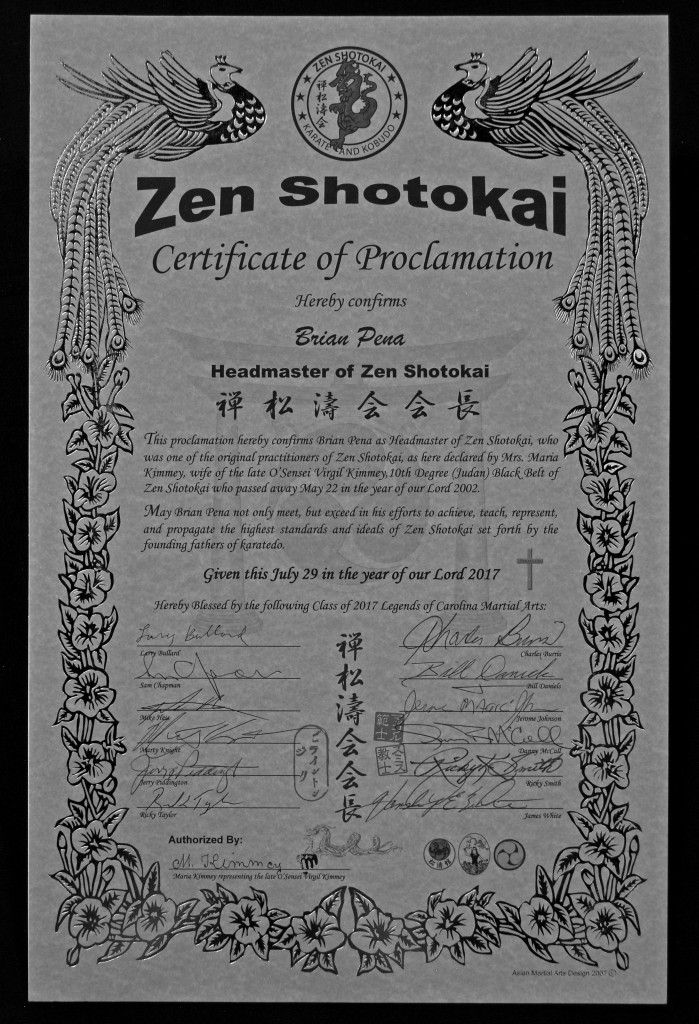 The Silver Dragon Pinnacle Warrior represents an inner circle of Family and Friends whose dedication of love, loyalty, and sincerity is the lifeblood of The Karate Dojo. The gratitude of this person’s friendship is immeasurable and will never be forgotten.

Sterling Silver Zen Shotokai Dragon pendants individually numbered starting at #001, as well as Certificates bestowed upon the recipient bearing the signature and seal of O’Sensei Mike Hess, Sensei Brian Pena, and Ms. Maria Kimmey will forever record their name in the history of Zen Shotokai Karate and Kobudo.

“Goodness is about character – integrity, honesty, kindness, generosity, moral courage, and the like. More than anything else, it is about how we treat other people.” – Dennis Prager

The Black Widow was the logo in the mid-late 1960’s for O’Sensei Virgil Kimmey’s Dojo after his training in Moo Duk Kwan and prior to his training in Zen Shotokai. Sensei Brian Pena is in possession of one of the original Black Widow patches used by O’Sensei Virgil Kimmey in the mid-late 1960’s. With the blessings of O’Sensei Mike Hess (O’Sensei Kimmey’s senior active student) and Ms. Cathy Keith (O’Sensei Kimmey first female Blackbelt), effective December 2020 Sensei Brian Pena has decided to offer the Black Widow as an elite group within Zen Shotokai – of elite Mind, Body, and Spirit.

“There is nothing outside of yourself that can ever enable you to get better, stronger, richer, quicker, or smarter.  Everything is within. Everything exists.” – Miyamoto Musashi